On 8 March 1927, the women’s branch of the Communist Party [Zhenotdel] began hujum, a campaign to liberate the Central Asian woman through the act of unveiling (Northrop, 12). In many countries, particularly Uzbekistan, Muslim women wore heavy veils, which concealed their faces and bodies. To the Bolsheviks, these veils were an obvious symbol of the oppression of women and the backwardness of the Central Asian people. Consequently, the Bolsheviks targeted the veil in order to help the people of Central Asia “realize their full human potential” (Khalid, 73). 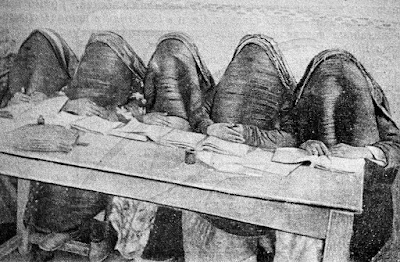 improve the health of Central Asian women. As the representatives of their cultures, Central Asian women were also responsible for improving their people’s “dirt, disease, and ignorance” (Northrop, 60). Women’s veils were thus equated with life stuck in the Middle Ages. Public unveilings were held in which women would gather together, remove their veils, and burn them. Not all unveilings, however, were voluntary; some women were forced to remove their veil at gunpoint (Northrop, 13).

Bolshevik activists wanted the unveiling to act as the catalyst to a complete societal and political change of the “backward and primitive” population of Central Asia (Northrop, 13). Hujum, which can be translated to an “’assault’ on the veil”, was an attempt by the Communist Party to modernize Central Asia, bypassing the capitalist period to move straight to socialism (Northrop, 27; Shneyder). When hujum started on 8 March, the Bolshevik leaders hoped that the unveiling and liberation of Central Asian women would occur in less than six months – just in time for the tenth anniversary of the Bolshevik Revolution (Northrop, 12). This goal, though, was not reached and hujum continued until 1939 (Khalid, 75).

By attempting to remove veils from society, Soviets created a symbol of Central Asia’s cultures, making women symbols of tradition and resistance. Many women would wear or remove their veil depending on their situation at the time. The woman’s veil became a national symbol and changed how people expressed their resistance to the new policies. Although some, for example, reacted violently by raping and murdering unveiled women, while others learned to show their resistance in commonplace acts (Northrop, 27). Instead of working towards a larger unified state, Bolshevik policies of hujum in Central Asia gave the indigenous peoples a symbol of their peoples and cultures.