Baksansky, Mysky, Prohladnensky, Tersky, Urvansky, Chegemsky, Chereksky, Elbrussky, and two cities of republican subordination which are Nalchik and Prohladny. The Republic is home to two major ethnic communities, the Karardins and the Balkars, and the majority of the 850,000 person population is Muslim (CRG). The Kabardino- Balkarian Republic is located on the northern slope of the central part of the Main Caucasian Ridge and borders on Georgia, Stavropol Territory, and the Republic of Noth Ossetia – Alania, Karachy – Cherkess Republic, and the Republic of Ingushetia. Kabardino-Balkaria is home to the two highest peaks in the North Caucasus, Mount Elbrus and Dykh Tau. The Republic, while covering only 12,500 square kilometers, is filled with mass mineral deposits and is an extremely fertile area (CRG).

The republic benefits economically from its natural resources. The economy is based on the selling of naturally abundant materials and agriculture. The Republic contains more than forty mineral deposits including some of the world’s richest tungsten and molybdenum. These minerals are mined and supply the Republic with raw materials to sell (Kommersant). The Republic’s industry is focused in Nalchik, Ttmyauz, Prohlodny, Terek, Baksan, and Maysky and close to 60% of the population lives in urban areas. However, agriculture is thriving. The rich soil and climate allow for a diverse agricultural sector. From basic farming, stock raising, and fur trading, the number of farms is over 470 and they play an important role in supplying food to the Republic (CRG).

Foreign investments also play a large role in the Republic’s economy. Republic receives large subsidies from Russia and the majority of goods produced within the Republic, such as oil extracting, medical, and wood processing equipment, grain cultures, artificial diamonds, and agricultural goods are exported to foreign countries. Over half of these exports are sent to capitalist countries such as Turkey, the United States, Germany, Finland, and the Netherlands. Foreign tourism also brings in revenue. From mountain climbing to downhill skiing, there are fourteen tourist centers, eight Alpine camps, and six hotels in the Republic.  Hot natural springs are also a major draw for tourists. Attracting mainly Russian tourists, the spas are built around sulphate-, iodine-bromine- and nitrogen-rich springs (CRG).

While over 100 different nationalities are represented within the Republic today, the two primary groups present in the area prior to coming under Russian control were the Kabardians, who speak a North-West Caucasian language, and the Balkars, who speak a Turkic language. While it is known that the Kabards entered the area during the 15th century it is unknown when the Balkars came to the northern slope (Kommersant). While there still much debate concerning the origins of these two groups, it is known they were nomadic tribes that came to the area and settled before the Mongols came to control the area between 1242 and 1295. It was under the control of the Georgians after this point until 1505 before being absorbed into the Persian Empire until 1516. From 1516 to 1557 the Republic was under the control of the Ottoman Empire until it became a protectorate of the expanding Russian State, which grew into the vast Russian Empire. Kabards, who resided in the lowlands, allied with the Russians. The Balkars, who lived in the mountains, resisted the Russians for years (Wiki).

While Kabardia had a brief window of independence from 1739-1774, it was annexed by Russia in 1774 followed by Balkria in 1827. The Russians established the capital of the region, Nalchik, in 1818 and a large number of Russians were brought in to settle the area and keep control. Over the next century the region struggled for autonomy. During the Russian Civil War the region became a part of the anti-communist South Eastern League and then joined the Mountain People’s Autonomous Republic in 1921. With the emergence of the Soviet Union the territories were reorganized into the Autonomous Oblast and then the following year elevated in status by being renamed the Kabardino-Balkar Autonomous Soviet Socialist Republic. Like the boundaries of neighboring regions, the boundaries of the Kabardino-Balkarian Republic have been continuously redrawn throughout history(Kommersant).

Memorial to victims of violent deportation of the Balkar nationals

In 1944 Joseph Stalin accused the Balkars, who had resisted Soviet control, of collaborating with Nazi Germany and the entire population was deported. “Balkar” was removed from the name of the Republic, which was then renamed Kabardin ASSR.  The Soviet government set out to forcibly deport almost the entire Balkar population to Kazakhstan, Kyrgyzstan , and the Omsk Oblast in Sibera. On March 8th, the People’s Commissariat for Internal Affairs (NKVD) loaded 37,713 Balkars onto trains bound for Central Asia and Siberia. Thousands died on these train rides due to disease, malnutrition, and the extreme cold. These deportations were not unique to the Balkars in Soviet Russia. Ethnic Germans, Kalmyks, Karachais, Chechens, and Ingush all faced similar settlement restrictions to those imposed on the exiled and deported Balkars. Two years later the Balkar population had shrunk drastically to 32,817; over 5,000 Balkars had died. In 1957, the Balkars were finally allowed to return to their home in the Caucasus. A growing population of Balkars numbering 34,749 returned to the region and their name was restored to the name of the Republic (Wiki).

In 1991, Kabardino- Balkaria became a full republic and a year later became one of the constituent republics of the Russian Federation which was also known as the Russian Soviet Federative Socialist Republic or, after 1993, as Russia. However this newfound stability as an autonomous region was short lived. With the fall of the Soviet Union and the outbreak of war on the Georgian border and in nearby Chechnya, the economy of the republic was put under great duress. There has been a collapse in tourism in the area and has produced high levels of unemployment (BBC).

Today, the Balkars represent just12.7% of the population, due to Stalin’s forced deportation. In comparison, 57.2% of the population identifies as Kabardin. The second largest nationality represented within the region is Russian at 22.5% of the population (CRG). This dynamic between mainly Muslim Kabardins, Russians, and Balkars has led to increasing friction in the region which surfaced in 1992 when the Balkars attempted to succeed from the Republic. Outside forces are also causing turmoil in the small republic. Since 2004, Russia has repeatedly intervened and targeted what it believes are Islamic militants operating in Kabardino-Balkaria. 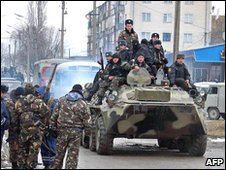 In October 2005, militants staged a large scale assault on major government buildings in the capital city of Nalchik. Russian forces mobilized quickly but their interference  resulted in dozens of deaths including militants, civilians, and Russian forces. In 2010, the most important Muslim cleric in the region was shot dead and in February 2011, there were attacks at multiple ski resorts in the region, which Russia claimed were preparations for assaults on the 2014 Winter Olympics in nearby Sochi. These attacks have been perceived by Russia and much of the Global community as a push by Chechen rebels to widen the Chechnya’s conflict with Russia to include the Kabardino-Balkarian Republic (BBC).

While the country is currently under great strain and is being increasingly drawn into the middle of the Chechen- Russian conflict, the Kabardino-Balkarian Republic remains a small but diverse republic that can trace its history back to nomadic tribes that once dwelled in the mountains.